The National Art Museum of Catalonia (MNAC) has rethought the approach to urban planning in the area around the Southern Caldes Stream with the exhibition “Cutting-Edge Landscapes”, which features 30 final projects by students from the UIC Barcelona School of Architecture.

All of these projects focus on restructuring the area around the Southern Caldes Stream, which encompasses Mollet del Vallès, Santa Perpètua de Mogoda, Martorelles, Sant Fost de Campsentelles and La Llagosta, all in the province of Barcelona. Architect Álvaro Cuéllar, one of the project’s directors, pointed out that, “the idea is to preserve the urban environment” of the area in question and delimit a zone in which the infrastructure divides rather than unites.

This comprehensive project is based on three workshops entitled New Opportunities for the Entropic Landscape, Disentropy and Biodiversity and Archidiversity. To transform the area, the projects propose a combination of rural areas and industrial estates, public facilities and large green corridors that run adjacent to the Caldes Stream, thereby eliminating barriers such as the interchange near Mollet and re-establishing corridors between towns.

Contributions to the Master Plan

Cuéllar pointed out that a master plan will soon be launched to restructure the Southern Caldes Stream, and added that efforts will be made to ensure that “some of this can be incorporated” into the approach. He went on to say that this is not just a job for the public sector, but that the private sector also has an important role to play in this project. Another important aspect of the projects is their “commitment to decentalisation”, as the proposal would provide an area with approximately 100,000 inhabitants a series of services that, at present, are only available in Barcelona.

The exhibition features a number of projects, including an urban garden research centre, a gastronomic research centre in Castell de Mogodo and an interchange station at the rail junction between Santa Perpètua de Mogoda and Mollet del Vallès. 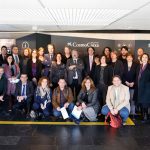