Let’s rethink the stream! Walks and discussions about the Public Opinion Maps

Some forty-odd local residents attended the participatory workshops Let’s rethink the stream! on Sunday 4 and 11 June, organised as part of Viu la riera project in Caldes de Montbui, Palau-solità i Plegamans, Santa Perpètua de Mogoda and La Llagosta, to prioritise initiatives for improving the riparian landscape based on the Public Opinion Maps generated through the web-based tool Viu la riera-SIGPP.

The town meetings began with the presentation of the Public Opinion Maps created thanks to the online participation of local residents via the Comment website. The basic information regarding participation is as follows: 120 citizens and 1,873 comments, of which 1,070 were positive, 384 negative and 419 were ideas for improving the area near the stream. Participation exceeded all expectations and illustrated the importance the stream has for people, and while the positive assessments far outnumbered the negative, a lot more work still needs to be done to improve the area.

After presenting and discussing the Public Opinion Maps, each attendee was handed a printed map identifying the most frequently mentioned proposals for improvement in their town. These maps guided the participants during the walks that each town organised along specific stretches of the Caldes Stream. In the case of La Llagosta, the main issues were access barriers and the restoration of the riparian landscape. In Santa Perpètua de Mogoda, these included educational initiatives aimed at correcting antisocial behaviour and the infrastructure’s impact on the landscape. As for Palau-solità i Plegamans, the main concerns consisted of preserving the stream’s natural beauty and vegetation control in light of the flash flood risk. Lastly, the issues that were most frequently mentioned on the website by residents of Caldes de Montbui were conservation of cultural heritage and vegetation and invasive species control. During the routes, stops were made in order to discuss the proposals in situ, while, on the way back to the municipal meeting points, refreshments were served prior to the morning’s final activity.

The aperitif was followed by the presentation of the new phase of the web-based tool, We decide, through which users can vote for and comment on all proposals for improvement online. 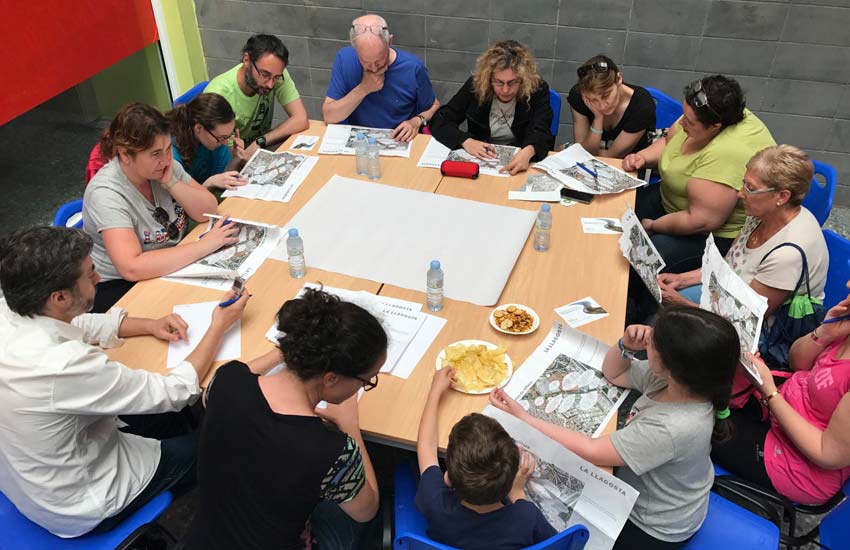 In the third and final part of the workshop, discussion panels were set up so that each attendee could state which proposals for improvement they felt were of highest priority and to start a debate aimed at reaching a consensus among all the attendees. In the case of La Llagosta, the participants agreed on the need to raise the initiative’s visibility in the town and get local institutions involved in matters of promotion. They also reached agreements as to specific ideas for improvement, such as collecting waste from the area near the stream, restoring the landscape and opening a waterway outside the main channel that connects all the towns. In Santa Perpètua de Mogoda, attendees reached a consensus on the need to restrict vehicle and pedestrian access to the channel, leverage the bridges as viewpoints of the riparian landscape, clean the stream of solid waste and grime and take actions to raise social awareness of the need to preserve inland waterways. In Palau-solità i Plegamans, agreements were made as to the need to restore the natural habitats along the banks of the stream and respect the local fauna by clearing the channel of reeds and trees, as well as the importance of separating the footpath from the bike path along the Ronda Verda. And lastly, in the case of Caldes de Montbui, the participants reached a consensus regarding the need to clean the channel and remove waste. More specifically, attendees felt it would be advisable to, on the one hand, conduct a public awareness campaign to dissuade people from flushing wipes down the toilet and, on the other, work with an expert consultant to assess potential solutions to the problem of spillways during episodes of heavy rainfall. At the end of the session, two lists were drawn up: one with the steps needed to implement these actions; and one with the entities and institutions which could potentially undertake and participate in these initiatives.

Based on these results, the next meetings scheduled for July will include talks by experts on riparian landscapes, followed by a debate between the public and institutions aimed at defining the actions required to improve the stream and setting up a network of citizens committed to promoting these initiatives.

Viu la riera! is a project promoted by the RIL Research Group from the ESARQ – School of Architecture at UIC Barcelona and the University of Girona’s Institute of the Environment. It is supported by RecerCaixa, a joint programme of the Obra Social “la Caixa”, the Catalan Association of Public Universities (ACUP) and the Spanish Foundation for Science and Technology (FECYT) of the Spanish Ministry of Economy, Industry and Competitiveness. 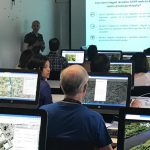