Schools also getting involved in the Viu la riera project

School involvement in the project is crucial in terms of making youngsters aware of the ecological, social, cultural and landscape values the Caldes Stream represents.

Since last spring, the team behind Viu la riera has been holding meetings with schools in the four towns on the Caldes Stream thanks to its strategic role and importance in the community and enormous potential for environmental education. The objective of these meetings has been to encourage the development of educational initiatives centred on the river and to foster public awareness through use of the Mulla’t web platform, which lists the dates and times of every activity being organised in connection with the Caldes Stream.

The Caldes Stream is part of the everyday urban landscape of the four towns, and, as such, offers a good opportunity for action. Schools are introducing educational strategies to get pupils more involved with the stream. The idea is to increase their knowledge of the stream, helping them to identify with the riparian landscape and fomenting a desire to love and protect it. Recognition from an Escola Verda (there are seven of them throughout the entire basin) was a starting point in efforts to establish a series of commitments from the educational community with regard to the Caldes Stream. Though the inertia of the participatory process led to contact with other primary and secondary schools in the area.

The Escola Verda project has a clear commitment to the environment; a commitment ranging from the inclusion of content about environmental sustainability in all subjects to efficiently managing the schools’ resources (especially water, energy and waste). Within the framework of these actions, the Viu la riera project seeks to encourage the inclusion or heightened presence of the Caldes Stream in school education programmes, turning it into an area of school work that has an impact on curricular content or even on the way in which schools inform and educate. How will this be achieved? What stage are we at today?

In the information and work sessions held as part of the project, schools have shown a high level of interest and willingness to continue and reinforce the use of the Caldes Stream as an educational resource. As a result, field trips will be included in the subject Medi, taught in primary education, and the teaching staff will put forward trips and workshops based on the Caldes Stream to be included as suggestions in the educational activity catalogues published by local councils for all education levels. News items about the stream can also be included in school magazines written by the pupils themselves or else the stream could form the subject matter for end-of-course research studies in secondary schools. Furthermore, the Caldes Stream could also be the core subject for interdisciplinary projects in schools, such as knowledge of our environment.

At the same time, there is also a desire to promote and establish coordinated and shared working relationships with other social entities that support the Caldes Stream. In this respect, some interesting initiatives have materialised that have put schools in contact with other municipal associations, with pupil participation in the Let’s Clean-Up Europe Day organised by the Caldes Stream Defence Group, consisting of removing solid urban waste from the stream’s bed as part of the curricular subject Servicio Comunitario, taught in secondary schools and based on volunteerism. Initiatives are also being put forward to involve senior citizens’ centres in order to take advantage of the memories and oral testimonies of elderly people to appreciate how the river landscape has changed. There are also schools interested in bringing in expert naturalists involved in local environmental groups, who can explain the ecological values of the stream and environmental impacts, etc., giving pupils a better idea of the current state of the riparian surroundings.

We are currently faced with a great opportunity to develop a collective sense of shared responsibility throughout the region to protect such an important and close at hand asset as the Caldes Stream. 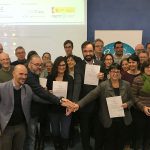 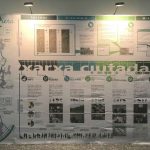